We use certain yeasts in daily food production to make bread rise or to brew beer, for example.

We use certain yeasts in daily food production to make bread rise or to brew beer, for example.

Yeasts account for about 1% of all the fungi on earth. For the most part, they are unicellular, but a number of them form hyphal threads. Around 1,500 yeasts have so far been described scientifically. One of the most well-known is ordinary brewer’s yeast (Saccharomyces cerevisiae), also known as baker’s yeast. Yeasts, such as Candida albicans (better known as candida) also are present in our bodies. Candida is not normally harmful but can cause infections.

Yeasts have a cell nucleus and are eukaryotes. Yeast cells vary enormously in size. The average yeast is between 3 and 4 micrometres (or ‘µm’ – one thousandth of a millimetre). The largest can be as big as 40 µm.

From rising agent to biofuel

Given aerobic (oxygen-rich) conditions, the yeasts in bread dough will produce carbon dioxide (CO2) and water from glucose (sugars) and oxygen (O2). The carbon dioxide that the yeasts give off in the process causes the dough to rise. Given anaerobic conditions (no oxygen), the yeasts in beer produce alcohol from glucose. In microbiology, yeasts are often used as specimens of eukaryote cells. Yeasts are also increasingly being used in biotechnology, for instance to generate electricity in microbial fuel cells and to produce ethanol for use as biofuel. 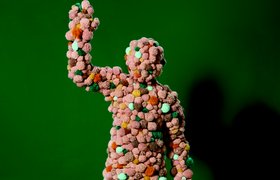 You always thought you were alone. Nothing could be further from the truth.