The environment in the vagina is unique. In comparison to most other parts of the body, it is very acidic. This low pH is partly caused by the microbes that live in the female sex organ. Those that live on the mucosa are mainly lactic acid bacteria (of the genus Lactobacillus) that produce lactic acid, in much the same way as when milk is converted into yogurt. This creates a low pH environment that many pathogens can not easily tolerate. Thus, the vaginal microbiota plays an important part in women’s health.

In 25% to 30% of women, the vaginal microbiota is out of balance. This is referred to as bacterial vaginosis (BV). These women have an above-average level of microbial diversity in their vaginas. In many such cases, the bacterium Gardnerella vaginalis tends to dominate the vaginal environment, rather than the usual Lactobacillus bacteria. As a result, the pH is higher. BV can have far-reaching impacts on health. Aside from causing vaginal discharge and other problems, it is associated with an increased risk of pelvic inflammatory disease (PID), uterine infections (endometritis) and premature birth. In addition, women with this abnormal vaginal microbiota are more susceptible to HIV and other sexually transmitted diseases (STDs). Thus, it is important to diagnose BV rapidly and, more especially, correctly.

The current test for BV involves a microscopic examination (referred to as Nugent scoring or Amsel criteria). The only problem is that these methods are not always consistently accurate and objective. It has been shown that the results sometimes depend on which technician performed the test. For this reason, Remco Kort (Micropia Professor at Vrije Universiteit Amsterdam) set out to find a better method, in collaboration with the GGD’s STD clinic, TNO and Vrije Universiteit Amsterdam. They published their findings this week, in BMC Infectious Diseases (an open access journal).

Prof. Kort and his team analysed the composition of the vaginal microbiota using three molecular methods (next generation sequencing, microarrays, and DNA profiling). They examined a total of 40 vaginal swabs, and found 20 cases of BV. The molecular methods all used DNA isolated from the smears, but each method determines the bacterial composition of the samples in a different way.

Based on the molecular analyses, Remco Kort was able to distinguish five distinct clusters within the 40 samples. Two of these involved BV-negative women, while the other three consisted of BV-positive women. All of the healthy vaginal microbiota were dominated by Lactobacillus iners and Lactobacillus crispatus. The three BV clusters, however, had a high bacterial diversity and were dominated by anaerobic (i.e. living without oxygen) bacteria, such as Gardnerella vaginalis. Prof. Kort explains that “Thus high bacterial diversity and relatively low numbers of Lactobacillus bacteria appear to be good indicators of bacterial vaginosis.” The only remaining problem is that these molecular tests are too expensive for routine clinical use. Remco Kort points out that “For this reason, TNO is currently developing a simple and affordable molecular test to replace the existing systems, one that can detect BV more reliably”. 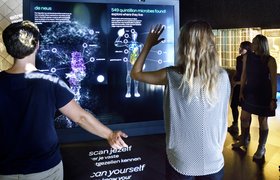 Want to discover how you can better protect your own microbes? Go on a journey of discovery through your own body with Micropia’s bodyscan. Plan your visit.