Chloroplasts play an important part in the process of photosynthesis in some organisms. The chloroplast absorbs the energy in sunlight and uses it to produce sugars.

Chloroplasts play an important part in the process of photosynthesis in some organisms. The chloroplast absorbs the energy in sunlight and uses it to produce sugars.

A chloroplast is a green organelle which some eukaryotes, such as plants and algae, have in their cells. It is in charge of photosynthesis, the process which produces the energy which the organism needs to survive. A chloroplast uses energy from light to make sugars from carbon dioxide (CO2) and water (H2O).

Chloroplasts’ construction and genome (the complete set of genes) are very like early prokaryote micro-organisms. This is also true of mitochondria. Scientists think chloroplasts and mitochondria originated through an interaction between early prokaryotes which were absorbed in the cell of cellular organisms. This phenomenon is called endosymbiosis.

Chloroplasts are made up of pigments which absorb sunlight, especially blue and red light and reflect green light. That is why they appear green.

Human cells have no chloroplasts. Despite this, chloroplasts are essential to human life. These organelles in plants and algae take care of the oxygen production on earth. They also absorb enormous amounts of CO2 during the process of photosynthesis, removing it from the atmosphere and so help limit the greenhouse effect. 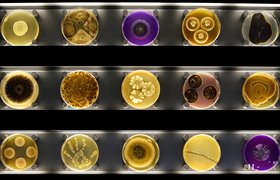