These small organisms use special fragrances known as terpenes to communicate. A huge number of different fragrances exist. Microbes like to use various kinds and are therefore multilingual. In this language of smells, or chemical communication, terpenes are the most common fragrances. Different kinds of microbes can even communicate with each other in ‘Terpene’.

The research shows that fungi and bacteria can communicate. For example, they communicate with each other about the environment and are aware of each other's presence. Group leader Paolina Garbeva explains: 'Serratia, a soil bacterium, can "smell" the fragrant terpenes produced by Fusarium, a plant pathogenic fungus. It responds by becoming mobile and producing a terpene of its own.' Another example is the amoeba Saccamoeba lacustris. This listens to conversations between soil bacteria by smelling them. The amoeba can perceive a conversation from a distance of up to 10 centimetres and can smell the difference between different kinds of soil bacteria. This allows them to find their prey more easily in the dark and compact soil.

Microbes, however, are not the only speakers of this language of smells. Many species of plants and animals also use terpenes to communicate. For example, flowers produce fragrances to attract pollinating insects and plants produce bitter molecules to stop them being eaten. In mammals, terpene serves as a pheromone, a natural odour which is intended to attract individuals of the opposite sex. Who knows, maybe we are native speakers too without realising it. 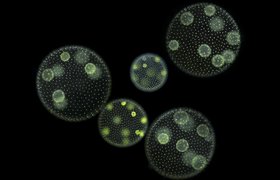 Would you like to find out more about how animals, plants and microbes communicate? Come to ARTIS and Micropia and discover all about this wonderful world.