Even though they are microscopically small organisms, tardigrades have muscles, nerves, feet, eyes and a muzzle. When they encounter extreme situations, they survive by entering a state of suspended animation. This is also known as cryptobiosis. They shrink into a barrel-like shape, at which point their body contains just three percent of its normal amount of water. When their surroundings become liveable again, tardigrades come back to life.

In 1983, researchers in Antarctica went in search of a tardigrade species called Acutuncus antarcticus. They found several specimens on pieces of frozen moss. The researchers took these specimens to their laboratory, where they were stored at -20°C for over thirty years. They were not thawed out again until 2014. Ultimately, the researchers found three tardigrades that had returned to life. Appropriately, they christened them Sleeping Beauty 1, 2, and 3. After a few days, these scientists observed the tardigrades walking around again and eating moss. Some of them even started breeding again, successfully. Prior to this discovery, the record for surviving in a frozen state (25.5 years) had been held by a nematode, Plectus murrayi. After being thawed out, however, these nematodes were no longer able to breed.

Under different conditions, tardigrades are able to survive a “mere” ten years, or thereabouts, in suspended animation. This is because oxygen, which is produced during digestion, damages the tardigrade’s cells. The researchers think that a combination of cold and lack of oxygen enables tardigrades in Antarctica to survive cryptobiosis for longer periods than normal. Scientists hope that further research will enable them to learn more about the mechanisms that underpin cryptobiosis. 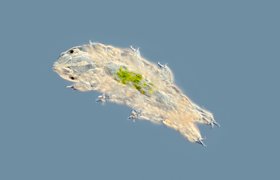 See a living water bear under a microscope and how it moves with its eight legs. Plan your visit.