His work represents a collaboration between Micropia and the Netherlands Organisation for Applied Scientific Research (TNO) and scientifically underpins the kiss-o-meter in the world’s first museum of microbes.

Professor Kort investigated just how many bacteria are exchanged by people when they kiss. “French kissing is a great example of exposure to a gigantic number of bacteria in a short time. As many as 80 million in a period of just 10 seconds,” he says. “Some establish themselves on your tongue, but a great many don’t. We set out to measure the similarity of the oral microbiota – all the micro-organisms carried in the mouth – of partners who kiss each other.” His research is published November 17th in the scientific open access journal, Microbiome .

Professor Kort’s kissing research involved looking into the effects of intimate kissing (involving the tongue) on people’s oral microbiota. Tests were carried out on 21 couples. They were quizzed on their kissing behaviour. Questions included: ‘When did you last kiss?’ and ‘How often do you kiss?’ Cotton-wool buds were used to obtain samples from the tongues of the research subjects. They were also required to spit into phials to provide saliva samples. Experiments involved subjects doing this both before and after kissing sessions.

Professor Kort was also interested in the number of bacteria exchanged during a bout of intimate kissing. “To arrive at that number, you need a marker bacterium which is rarely found in the mouth,” he explains. The professor had one partner from each couple drink a (probiotic) yoghurt drink after a first kiss and then, after a short interval, he had the couple kiss each other again. After this, the bacteria from the drink were discernible in the saliva and on the tongue of the partner who had not been given the drink.

Samples of oral flora from the tongues of kissing partners were far more similar than samples from randomly chosen people. The manner of kissing appeared not to have much effect in this respect: intimate kissing did not lead to an increase in the similarity of micro-organisms on the partners’ tongues. Remco Kort: “It didn’t matter whether the couples said they French kissed nine times a day or nine times a year. Obviously, there are other important factors involved such as sharing the same diet or using the same toothpaste for example.” A clear effect was, however, apparent as far as saliva was concerned: the more often people kiss each other, the more alike the collections of bacteria in their saliva become. Couples exchange an average of 80 million bacteria during a 10-second session of intimate kissing.

Micropia’s kiss-o-meter allows people to discover just how many and what type of microbes they exchange during an intimate kiss. The mouth alone is home to 700 different kinds of bacteria. Despite being invisible, they are among the most successful life forms on earth and Micropia puts them on show. Professor Kort’s kissing research was carried out in collaboration with the TNO. It exemplifies how Micropia makes the world of micro-organisms accessible to the general public. Remco Kort is a microbiologist and principal scientist at the TNO and is Professor of Microbial Genomics at Amsterdam’s VU University. He has been an adviser to Micropia for eight years.

The 3,000 professionals at the TNO use their knowledge and experience to provide ingenious solutions to complex problems. These innovations contribute to strengthening the competitive prowess of companies and increasing the well-being of our society in a sustainable way. Over 3,000 businesses and organisations in the Netherlands and abroad are partners of TNO helping achieve its goals. The Royal Association MKB-Nederland SMB umbrella organisation is one such partner. If you would like to know more about the TNO and its five social objectives, see tno.nl . 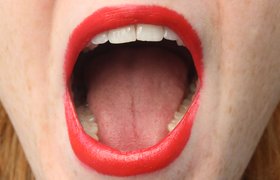 Your mouth is a hive of activity. Approximately ten billion bacteria live in your mouth.