The water bear or moss piglet is a real animal despite its small size. It has legs (8), eyes, nerves, muscles and a snout-like mouth. It can survive extreme conditions for nearly 30 years.

The water bear or moss piglet is a real animal despite its small size. It has legs (8), eyes, nerves, muscles and a snout-like mouth. It can survive extreme conditions for nearly 30 years.

Water bears live everywhere around us, for example in moss, on stones or roof tiles which have a bit of moss on them. They are also found, though, on high mountains and in the depths of the sea.

The water bear can put itself into a kind of sleep mode in order to survive. It crumples up into a small ball with water content of just 3%. It can wake from this state after a period of 30 years even though its normal lifespan is just a few months. It ‘comes alive’ again as soon as the environmental conditions allow. A few drops of water are enough.

In 2007, a number of water bears were sent on a rocket into space. Some of the tiny animals were still alive when they came back to earth ten days later. They had survived extreme cold, a vacuum and high concentrations of cosmic and UV radiation.

Burrowing bears on the beach

Currently there are 18 species of tardigrades known in the Netherlands. Probably there are a lot more: because they are less than half a millimeter in size, you literally walk past them without noticing. One of the most recent discoveries is the species Batillipes pennaki. These waterbears are found on beaches around the world in the top layer of sand. Unique for this species is a triangular piercing tube that looks like the tip of a fountain pen, with which the waterbears suck up algae. 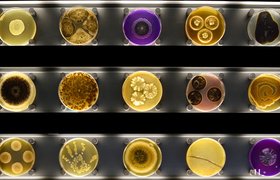 When you look from really close, a new world is revealed to you. Discover the invisible.